Diversity, Equity, and Inclusion — Uplift and Create Healthier Environments for All at Home, at Work, and in Community | Virtual Panel | Thursday, June 24 | 11 am PT/2pm ET

Equity and inclusion is the foundation for a thriving, healthy society and contributes to all of our well being. And, we’re seeing that there’s still a lot of work that needs to be done. The pandemic caused the inequality gap that already existed in our country to grow more rapidly. In fact it's hit the LGBTQ+ community harder in some areas than might appear at first glance. Join us as we take an intersectional view, looking at the importance of continuing our work to create a society that supports and values each of its members equally.

How can we support one another and create inclusive environments at home, at work and in our communities?

Our speakers will talk about their real-life experiences, give practical tips and strategies to help, with ideas for how to:

Ann is a financial services leader with 15+ years of experience in marketing, diverse segment strategy, and DE&I change management. She brings a unique background of consumer-facing, consulting/coaching, and corporate leadership experience and approaches business problems with an inclusive mindset. Ann is passionate about the power of diversity, equity, and inclusion in the workplace, and believes when done well, it has the power to drive innovation and greater organizational performance.

John-Anthony Meza is the head of Arabella Advisors’ Culture and Talent team. In this role, he leads the vision and day-to-day operations of the company’s human resources team, including total rewards, talent acquisition, and employee engagement and retention. As a member of the senior leadership team, John-Anthony helps develop a firmwide strategy for supporting Arabella’s people and cultivating an innovative, inclusive culture.

He is active in his community and has served on many nonprofit boards. He lives in the nation’s capital with his three kids, husband, two dogs, and their menagerie of other pets.

Libby Alexander & Amanda Wendler, Mother and Daughter whose story the film Four Good Days is based

Libby's and Amanda's emotional journey was originally captured in an article written by Pulitzer Prize-winning Washington Post writer Eli Saslow. Amanda's 10 year heroin addition strained their relationship with her mother, Libby to the point where it torn them apart. After several attempts over the years with overcoming her addiction when Amanda was 31, she found she was a good candidate for the naltrexone shot that make is it impossible to get high by blocking the effects of opiates on the brain. The Washington Post article and the film Four Good Days document this last attempt at sobriety the 4 days before she gets the treatment, and the struggle to remain clean. 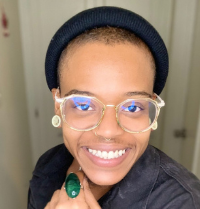 As an artist and activist, Sir Lex strives to bring marginalized stories to the center of popular culture through comedy series and documentaries. Sir Lex has directed multiple short films featured in film festivals like,  Campus MovieFest, Newfest, Fusion and Outfest, through their inaugural OutSet program and across the world, winning numerous awards.  Sir Lex completed a Sound Fellowship this past fall for DISCLOSURE, documentary which recently premiered at Sundance.

Lex worked as a Producer for Tribune Creative West/KTLA5 in Los Angeles, CA. He is currently working for ABC7/Disney until his contract ends due to COVID-19. Over the summer of 2020 he produced and assistant directed on the short, edible. He is currently producing the pilot to his series RETROS!

Since Laura hit the ground running at VolunteerMatch nearly 2 years ago, she has spearheaded strategic partnerships with Apple, ABC/Disney, and Cumulus Media that benefit grassroots nonprofits. Her other creative collaborations – the VolunteerMatch Influence Fund and the Coalition for Volunteer Impact – leverage multimillion dollar investments and cross-sector data to increase capacity for Black and Brown-led nonprofits and lead the way to understand COVID-19’s impact on volunteering.

Plenty of tutorials on how to use the CLEAN series to it's full potential.

Made with loads of customization options that don't require touching a lick of code.

The best experiences are those that feel intuitive and full of surprise and delight.